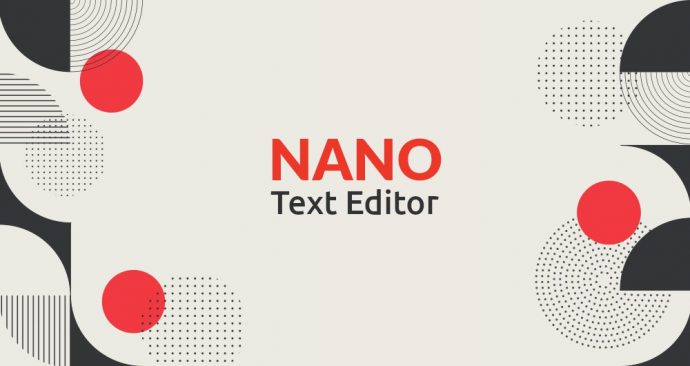 When working on the command line quite often you will need to create or edit text files. Two of the most powerful and popular used command line editors are Vim and Emacs. Both of them have a steep learning curve that can be intimidating to new users. For those who need a simple editor, there is nano.

GNU nano is an easy to use command line text editor for Unix and Linux operating systems. It includes all the basic functionality you’d expect from a regular text editor, like syntax highlighting, multiple buffers, search and replace with regular expression support, spellchecking, UTF-8 encoding, and more.

In this guide, we will cover the basics of using the nano editor including how to create and open a file, edit a file, save a file, search and replace text, cut and paste text, and more.

Nano text editor is pre-installed on macOS and most Linux distros. To check if it is installed on your system type:

If you don’t have nano installed on your system, you can install it using the package manager of your distribution.

Install Nano on Ubuntu and Debian

Install Nano on CentOS and Fedora

To open an existing file or to create a new file, type nano followed by the file name:

This opens a new editor window and you can start editing the file.

At the bottom of the window, there is a list of the most basic command shortcuts to use with the nano editor.

All commands are prefixed with either ^ or M character. The caret symbol (^) represents the Ctrl key. For example, the ^J commands mean to press the Ctrl and J keys at the same time. The letter M represents the Alt key.

You can get a list of all commands by typing Ctrl+g.

To be able to open a file you must have read permissions to the file.

If you want to open a file with the cursor on a specific line and character use the following syntax:

If you omit the character_number the cursor will be positioned on the first character.

Unlike vi, nano is a modeless editor which means that you can start typing and editing the text immediately after opening the file.

To move the cursor to a specific line and character number, use the Ctrl+_command. The menu on the bottom of the screen will change. Enter the number(s) in the “Enter line number, column number:” field and hit Enter.

To search for a text hit Ctrl+w, type in the search term, and press Enter. The cursor will move to the first match. To move to the next match, press Alt+w.

If you want to search and replace, press Ctrl+\. Enter the search term and the text to be replaced with. The editor will move to the first match and ask you whether to replace it. After hitting Y or N it will move to the next match. Pressing A will replace all matches.

If you want to cut whole lines simply move the cursor to the line and press Ctrl+k. You can cut multiple lines by hitting Ctrl+k several times.

To paste the text move the cursor to where you want to put the text and press Ctrl+u.

To save the changes you’ve made to the file, press Ctrl+o. If the file doesn’t already exist, it will be created once you save it.

If you want to exit nano press Ctrl+x. If there are unsaved changes you’ll be asked whether you want to save the changes.

Options specified in the user file take precedence over the global options.

Visit the nanorc page for a complete list of all available option.

Nano ships with syntax highlighting rules for most popular file types. On most Linux systems the syntax files are stored in the /usr/share/nano directory and included by default in the /etc/nanorc configuration file.

The easiest option to enable highlighting for a new file type, is to add the syntax highlighting rules file to the /usr/share/nano directory.

Bash users can export the variables in the ~/.bashrc file:

Below are the most basic steps for getting started with nano:

In this tutorial, we have shown you how to use Gnu nano text editor. It is a popular text editor among Linux users and has a small learning curve.