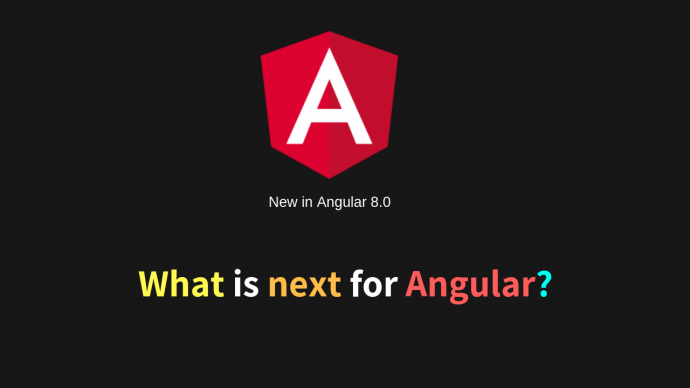 In this blog, let’s see what we should expect from the Angular 8 release.

Depending on your browserlist file, during the build Angular will create a separate bundle for polyfills. So basically you’ll have:

Using this feature will decrease the bundle size.

But how does this work?

Basically, Angular will build additional files with polyfills, and they will be injected with nomodule attributes.

SVG as a template

Ivy is still in the experimental phase and with the Angular 8 release you can test it by creating an app with enable-ivy flag set to true as shown below. Remember, it’s not fully functional (opt-in preview) and as suggested by Igor Minar in ngConf 2019, View Engine is still recommended for new apps.

To enable Ivy in an existing project set enableIvyoption in the angularCompilerOptions in your project’s tsconfig.app.json

You can create a new application with the new Engine as well:

Ivy will offer the following advantages, the first 3 features are expected in Angular 9:

Bazel is another tool open sourced by Google and “don’t we love Google for that”. As explained by Igor Minar, Bazel has been used internally for a long time and is now available for everyone to use. You can refer to the BazelDocumentation and also learn how to use it with Angular.

You are probably wondering: “Is Bazel ready?” Short answer: not yet. Currently, it is in the “opt-in preview” mode. Let me cite Alex Eagle, Angular tooling team lead at Google:

(Now) Sharks have been dealt with, but the water still might be cold.

Bazel is available as opt-in, it is expected to be included in @angular/cli in Version 9.

Bazel will provide these advantages:

You can add Bazel support using the below command:

Or, you can create a new app with Bazel as well:

The new version allows us to use Builders API, also known as Architect API.
Angular uses builders for main operations: serve , build , test , lint and e2e . You can see used builders in the angular.json file.

From now on we can create our custom builders. I think about this as the gulp/grunt commands in the “old days”.

Basically, the builder is just a function with a set of commands which you pass to the createBuilder() method from @angular-devkit/architect package.

You can check out the built-in Angular builders here.

For more details, you can check this awesome article in the Angular blog.

The new version is deprecating the loadChildren:stringsyntax for loading modules lazily.

The Angular Team wants to provide support for all developers using AngularJs and help them upgrade to Angular. The team has now added support for $location service when you upgrade. A new package angular/common/upgrade is added.

Web worker support is added in Angular 8. Now you can add web workers and delegate the time consuming processes which you want to run in the background to a web worker. Run the below command to generate a new web worker using the Angular CLI:

Usage of PWA is growing day by day, there are many improvements made to the service worker.

2. clear (remove all) elements from a FormArray.

Previously to remove all elements from formArray we had to loop removing the 1st element until empty:

Not anymore. We will have a native method.

With this feature, you can pass a static flag to define when you want a ViewChild and ContentChild instance to be resolved.

You’ve probably experienced this inconsistency: query results would sometimes be available in ngOnInit, but sometimes wouldn’t be available until ngAfterContentInit or ngAfterViewInit.

The above feature is not available for ViewChildren or ContentChildren. They will be resolved after Change Detection runs.

But be careful. Setting static: true will not allow you to get results from dynamic templates resolutions(e.g. *ngIf).

Schematic support is added to migrate the existing code to this syntax, as this syntax will be used for Ivy .

You can read more details about this option here.

Angular now uses TypeScript 3.4 (v7 uses 3.2.x). There are not a lot of breaking changes — so probably you should be good. You can check them out here.

If you are using Angular Firebase, there is really good news for you. You can deploy your application using the Angular CLI. Isn’t that exciting?!

You can run the below command to deploy the application using the CLI:

You can read more about this functionality on Angular Firebase.

Usage for any in TesBed.get

@angular/http package was deprecated in Angular 5 but was still available as @angular/ platform-server had the dependency on the same, now it is removed from the list of packages.

It’s not a well-known fact, but Angular was auto-correcting invalid usage of tr and col HTML elements.

For tr — the correction will be applied if the element is not inside tbody, tfoot or thead. In this case, it will be wrapped automatically in the tbody.

For col — the correction will be applied if the element is not inside colgroup. In this case, it will be wrapped automatically.

Now Angular has decided to leave this for developers, in order to avoid conflicts and issues. So you should wrap it by itself.

You can read more about this issue here.

Angular Material Project is renamed to Angular Components. The packages remain the same.

We are really close to Angular 8. The Angular team is doing a great job — which makes our job (and life) much easier. With every version, the update is smoother and smoother.

So the update should be painless and probably won’t take a lot of time.

For a step by step migration guide please check https://update.angular.io.

We should expect the Angular stable release the week of May 22nd as per Igor Minar, if all the issues are resolved.

The future of Angular looks bright. Everything else depends on us.