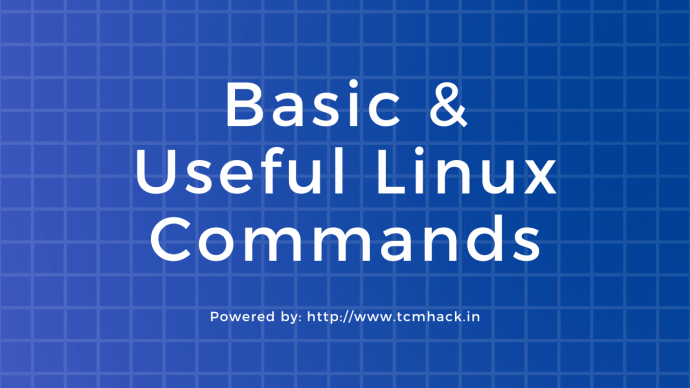 In this article, we’ll go through some of the most common Linux commands that are used on a daily basis by the Linux system administrators.

Getting Information About the Command

Memorizing command options is usually not necessary and may be a waste of time. Usually, if you are not using the command frequently, you can easily forget its options.

Most commands have a --help option which prints a short message about how to use the command and exits:

Almost all Linux commands are distributed together with man pages. A man or manual page is a form of documentation that explains what the command does, examples of how you run the command, and what arguments it accepts.

The man command is used to display the manual page of a given command.

For example, to open the man page of the, cd command you would type:

To navigate the man pages, use the Arrow, Page Up and Page Down keys. You can also press Enter key to move one line at a time, the Space bar to move to the next screen, and the b key to go one screen back. To exit the man page, press the q key.

When navigating the file system on operating on files, you can use either the absolute or the relative path to the resource.

The current working directory is the directory in which the user is currently working in. Each time you interact with your command prompt, you are working within a directory.

Use the pwd command to find out what directory you are currently in:

The command displays the path of your current working directory:

The cd (“change directory”) command is used to change the current working directory in Linux and other Unix-like operating systems.

When used without any argument, cd will take you to your home directory:

To change to a directory, you can use its absolute or relative path name.

You can also navigate to a directory by using its absolute path:

Two dots (..), one after the other, are representing the parent directory or, in other words, the directory immediately above the current one.

To move two levels up use:

To change back to the previous working directory, use the dash (-) character as an argument:

If the directory you want to change to has spaces in its name, you should either surround the path with quotes or use the backslash () character to escape the space:

Working with Files and Directories

The ls command is used to list information about files and directories within a directory.

When used with no options and arguments, ls displays a list in alphabetical order of the names of all files in the current working directory:

To list files in a specific directory, pass the path to the directory as an argument:

The default output of the ls command shows only the names of the files and directories. Use the -l to print files in a long listing format:

The ls command doesn’t list the hidden files by default. A hidden file is any file that begins with a period (.).

To display all files including the hidden files, use the -a option:

To display the contents of a file on the screen, pass the file name to cat as an argument:

The touch command is used to update the timestamps on existing files and directories as well as to create new, empty files.

To create a file, specify the file name as an argument:

If the file already exists, touch will change the file last access and modification times to the current time.

In Linux, you can create new directories (also known as folders) using the mkdir command.

To create a directory, pass the name of the directory as the argument to the command:

mkdir can take one or more directory names as its arguments.

When providing only the directory name, without the full path, it will be created in the current working directory.

To create parent directories use the -p option:

The command above creates the whole directory structure.

When mkdir is invoked with the -p option, it creates the directory only if it doesn’t exist.

A symbolic link (or symlink) is a special type of file that points to another file or directory.

If only one file is given as an argument ln creates a link to that file in the current working directory with the same name as the file it points to.

To remove files and directories use the rm command.

By default, when executed without any option, rm doesn’t remove directories. It also doesn’t prompt the user for whether to proceed with the removal of the given files.

To delete a file or a symlink, use the rm command followed by the file name as an argument:

rm accepts one or more file or directory names as its arguments.

The -i option tells rm to prompt the user for each given file before removing it:

Use the -d option to remove one or more empty directories:

To remove non-empty directories and all the files within them recursively, use the -r (recursive) option:

The -f option tells rm never to prompt the user and to ignore nonexistent files and arguments.

The cp command allows you to copy files and directories.

To copy a file in the current working directory, use the source file as a first argument and the new file as the second:

To copy a file to another directory, specify the absolute or the relative path to the destination directory. When only the directory name is specified as a destination, the copied file will have the same name as the original file.

By default, if the destination file exists, it will be overwritten.

To copy a directory, including all its files and subdirectories, use the -R or -r option:

The mv command (short from move) is used to rename and move and files and directories from one location to another.

For example to move a file to a directory you would run:

To rename a file you need to specify the destination file name:

The syntax for moving directories is the same as when moving files.

To move multiple files and directories at once, specify the destination directory as the last argument:

A package manager is a tool that allows you to install, update, remove, and otherwise manage distro-specific software packages.

Only root or user with sudo privileges can install and remove packages.

There are several command-line package management tools in Debian distributions with apt and apt-get being the most used ones.

Before installing a new package first, you need to update the APT package index:

The APT index is a database that holds records of available packages from the repositories enabled in your system.

To upgrade the installed packages to their latest versions run:

Installing packages is as simple as running:

To remove an installed package, enter:

RPM is a powerful package management system used by Red Hat Linux and its derivatives such as CentOS and Fedora. RPM also refers to the rpm command and .rpm file format.

To install a new package on Red Hat based distributions, you can use either yum or dnf commands:

To upgrade the installed packages to their latest versions, type:

Removing packages is as simple as:

In Linux, access to the files is managed through the file permissions, attributes, and ownership. This ensures that only authorized users and processes can access files and directories.

In Linux, each file is associated with an owner and a group and assigned with permission access rights for three different classes of users:

There are three permissions types that apply to each class:

This concept allows you to specify which users are allowed to read the file, write to the file, or execute the file.

To view the file owner and permissions, use the ls -l command.

The chmod command allows you to change the file permissions. It works in two modes, symbolic and numeric.

When using the numeric mode, you can set the permissions for the owner, group, and all others. Each write, read, and execute permissions have the following number value:

For example, to give the file’s owner read and write permissions and only read permissions to group members and all other users you would run:

Only root, the file owner, or user with sudo privileges can change the permissions of a file.

To recursively operate on all files and directories under a given directory, use the chmod command with the -R, (–recursive) option:

Be extra careful when recursively changing the files’ permissions.

The chown command allows you to change the user and group ownership of a given file, directory, or symbolic link.

To change the owner of a file, use the chown command followed by the user name of the new owner and the target file:

To change both the owner and the group of a file invoke the chown command followed by the new owner and group separated by a colon (:) with no intervening spaces and the target file:

Use the -R (--recursive) option, to recursively operate on all files and directories under the given directory:

The sudo command allows you to run programs as another user, by default the root user. If you spend a lot of time on the command line, sudo is one of the commands that you will use quite frequently.

Using sudo instead of login in as root is more secure because you can grant limited administrative privileges to individual users without them knowing the root password.

To use sudo, simply prefix the command with sudo:

Linux is a multi-user system, which means that more than one person can interact with the same system at the same time. Groups are used to organize and administer user accounts. The primary purpose of groups is to define a set of privileges such as reading, writing, or executing permission for a given resource that can be shared among the users within the group.

The useradd command allows you can create new users.

To create a new user account use the useradd command followed by the username:

Once the user is created, set the user password by running the passwd command:

In Linux, you can delete a user account using the userdel command.

To delete a user account named pass the user name to the userdel command:

Use the -r (–remove) option to remove the user’s home directory and mail spool:

To create a new group use the groupadd command followed by the group name:

To remove a group use the groupdel command with the group name as argument:

To add an existing user to a group, use the usermod command followed by the -G option and the name of the group:

We have covered some of the most used Gnu/Linux commands.

Although you can perform most of the development and system-related tasks using a graphical interface, the command line makes you more productive and able to get more done in less time.

Click on the links on each command to get more information about the command options and usage.

If you have any questions or feedback, feel free to leave a comment.